Scout Came To America (YES, REALLY!) All Knocked Up (Wait, what?!)

First of all, yes, Scout really is in America, and she really did have puppies. Here’s the proof:

But we have a lot to cover up to this point. I know I’m ridiculously behind in making this post, but it’s an awesome story, and it deserves to be told. Sorry it took a few months, but cut me some slack. She had seven puppies, for cryin’ out loud.

Let’s start back at the end of March, when the stupid junior officers held a stupid coup and chased ATT out of his palace and set Mali back a bajillion years and a constitution. I wrote about our evacuation and leaving Scout behind here:

"The worst part about all of this is that I have to leave Scout behind (Peace Corps does not allow PCVs to evacuate pets.). Honestly, leaving her has been the largest source of my tears over the past week. I know that saying that marks me, perhaps, as someone who missed the point of Peace Corps. It’s circumstantial that I’ve already said my goodbyes to my few friends from my old village [I was about to change villages], so I don’t really have anyone else to say goodbye to. But Scout has been a huge part of my life and happiness for the past seven and a half months. I left her with my old site mate’s homologue, an amazing man named Abdoullaye whom I know will take care of her.  I really hope I get to see her again someday, if anything just to rub her belly one more time and let her know that I didn’t forget about her."

Shortly after I wrote about this horribly sad, sad day, a series of amazing, wonderful, and completely serendipitous things transpired, and the end result is that Scout ended up home with me in Tennessee.

When we were all consolidated to Tubaniso, Jolie Dennis, our amazing Deputy Programming Officer pulled me aside to talk about Scout. She knew how much she meant to me and wanted to check in about how I was handling the situation. Jolie had even called me a few times during consolidation in Sikasso to specifically ask about Scout, how amazing is she?! Jolie then shocked my socks off when she offered, tentatively, to try and get Scout home to me.

was my reaction, and then about a nano second later I said YES YES YES YES let’s please try to figure this out. And so our story begins.

Turns out Jolie had experience of her own dealing with a coup and a possible evacuation while serving in Togo, and was able to empathize in only the way an RPCV pet owner can. Jolie and her husband had moved internationally with their own Peace Corps dog, and just recently, Jolie’s husband had fled the coup with him, too. It was just a stroke of good luck for me that she had an extra crate at home, all the right contacts at the appropriate government offices, and a stellar vet who made house calls (during the counter-coup, I later found out).

Throughout the evacuation to Ghana and the weeks I spent travelling after, Jolie and I kept up through emails. We discussed the political situation, the possibility that she herself may be evacuated, and the logistics of flying a dog halfway around the world. It was here that I learned that Mama Traore, the Regional Coordinator for all Sikasso volunteers, had been calling and physically checking in on Scout, who was in a village about 30k outside of Sikasso. Mama is an amazing man and went out of his way to do something that no one asked him to do. He is such a wonderful example of the famous Malian hospitality. I am still indebted to his amazing service to my peace of mind. I’ll probably never see him again, but I think about him every time I think about what it took to get Scout home.

Through some networking and Malian kindness, Scout hitched a ride up to Bamako on April 26th, about a month after the coup and three weeks after I left her with my friend Abdoullaye. (This time frame becomes significant later). According to Jolie it took her about ten minutes to make herself at home, barking at herself in a mirror and napping on the couch.
For the next few weeks Jolie earned sainthood by caring for my dog like she was her own, feeding her ridiculous amounts of rice, chicken, and hard-boiled eggs. She even had Scout during the dangerous and long counter-coup. Jolie’s house was near a military barracks and she heard shelling and gunfire almost daily. I am still amazed and so grateful that Jolie thanked ME for having Scout during that difficult time. I thought she’d be a burden and I fretted over the enormous task Jolie unknowingly signed up for; she said Scout’s company was a comfort. Scout has no comment. I guess it was a win-win.

Meanwhile, I was still travelling. Between Ghana, Greece, Spain, and Italy we had sporadic contact with both frantic (on my end) and reassuring, calming, and encouraging (on Jolie’s end) conversations about what was going on and what might happen. At this point, we still didn’t know if the State Department would grant clearance to Jolie to re-enter Mali after her and Scout’s upcoming trip. The political situation was (and sadly, remains) just so unclear and potentially volatile, especially in the north. It was scary to think that after all this effort, Jolie would be stuck, unable to come to America and see her husband, and I’d have put Jolie between a rock and a hard place with my homeless dog.

Miraculously, and not a moment too soon, the badgering and begging paid off and Jolie was granted clearance to re-enter Mali in a few weeks' time. With literally only days to spare, Jolie’s clearance, Scout’s ticket, and her veterinary paperwork all came through. It was incredibly timed, too, because had things been delayed even another week, Air France’s summertime black-out dates for live cargo would have been in effect, and Scout would have been stuck in Mali until September, maybe forever.

I swear I must have cashed in an eternity’s worth of karma points, because then the unthinkable happened: MY DOG CAME HOME TO AMERICA!!!!!!!!!

On May 26th, (I was in Italy on a pre-arranged family vacation), about two months after the coup, my cousin Ben and his wife Noel picked up my smelly, confused, and poop-covered puppy from Dulles International Airport. Apparently no one even checked her paperwork! According to Jolie they just said “Oh, what a pretty dog! Do you need any food for her?”

Jolie then said her goodbyes and flew to New York to be swept off her dusty feet by her husband, Istvan, who surprised her with a new house in Ithaca! How romantic! I’ll never be able to thank Jolie enough for what she did for me. I look at Scout every day and think how wonderful it is that she’s here. I am so lucky; I can look forward to years with her by my side. Thanks for your patience, positive attitude, and logistical finagling, Jolie.

While under the care of Ben and Noel, Scout was exposed to many wonderful American things, like air conditioning, sharing space with cats, hiking, hot dogs, sidewalks, carpet, and so much more. They went out of their way to make her feel more comfortable. For example, Noel took one for the team and risked outright shame with her neighbors by letting Scout pee on the pavement. Apparently Scout wasn't used to grass (don't know why I was surprised by this) and avoided it about 90% of the time.

When they picked me up from the airport with Scout in tow, I thought I’d have one of those “Soldier from Iraq greets his dog after two years” moments. No dice. She looked at me, got excited for about one second, and then hopped back in the car. She was all, “Oh, YOU again. You left me.” What sass!! Her attitude wore off though, because that night she slept ON me. It was pretty adorable.

Ben and Noel, thanks a million for hosting Scout. You are amazing people, and the dog you adopt some day will be very, very lucky. Thank you for opening up your home to Scout, a strange dog who may or may not have eaten your cats and one whose egg-smelling farts drove you from her, time and time again.

Soon after, my best friend Jenna drove up from Tennessee and together the three of us roadtripped back home, completing the longest journey Scout and I never thought she’d have. 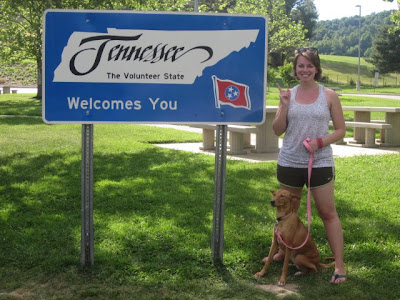 The story would have a warm, fuzzy, feel-good ending to it, IF ONLY IT ENDED THERE.

PART TWO, coming shortly:
[The part where it gets even warmer and fuzzier]
[Spoiler Alert: this is the part where I find out Scout is pregnant (!!!)]
Posted by Chelsea at 4:20 PM 1 comment:

Chelsea
I am from Brentwood, TN and received my degrees in Sociology and Environmental Studies from Maryville College in 2010. Follow me as I learn about the world through the eyes of an Environment Peace Corps Volunteer in Mali. I'll be here from February 2011 until April 2013.

Stuff You Can Always Send!